Teddy Kim saw early potential in the Parker-Gray neighborhood. The Alexandria native had graduated from Virginia Tech University with a degree in urban planning when in 2004 he initiated the process to buy a house in the neighborhood that was for sale by owner.

Kim, who was working in government contracting at the time and making about $30,000 a year, quickly ran into problems with securing financing. After his initial lender fell through, he turned to local mortgage broker Clay Greenway.

The process of buying the house, in the end, took months, but it piqued a lasting interest for Kim in real estate.

“I was able to fix the house up, pull out some equity and buy some new houses. That was the start of everything,” Kim said. “Within 12 months, I was onto my first commercial building.”

Kim set his sights on the former Electro Steam Generator Corp. building at 1000 Bernard St. He transformed it into office space and, in the process, found a passion for redeveloping commercial buildings.

“With the residential stuff, it wasn’t so much a passion then because I wasn’t really transforming anything,” Kim said. “The reason I started with residential was because of the low barrier to entry. You can get a lot more financing on a residential asset than a commercial asset. When I went to buy the warehouse, I designed it [and] I built it.”

Kim used some of the building’s existing features in the renovation and pulled design inspiration from his own background, including his grandfather’s Naval history. For example, on the building’s exterior he used metal in a gray reminiscent of Navy Destroyers and nautical elements like cable and natural wood for finishing touches.

Kim is also involved with a number of restaurant projects. Along with Chad Sparrow, Justin Sparrow and Larry Walston, Kim was part of the founding team at Mason Social, which opened in 2015. He’s since left that restaurant, but recently worked with another team to open quick service restaurant and bar The People’s Drug in the former Bittersweet Catering location.

His strategy is infill development, or developing vacant properties within already highly developed areas. He’s had extra incentive to redevelop Alexandria, where he has a vested interest. Kim was born and raised in the city, and opted to return after college to build a career. It’s where he plans to continue to invest.

“As you see D.C. really coming into this high value, a lot of people are moving into the city from other states and cities and into this area as a whole,” Kim said. “Alexandria is one of the best cities in the country.”

Kim was raised in Alexandria during a time when the city wasn’t necessarily a hot real estate market.

He grew up with his grandparents near Fort Ward Park in the 1980s and has memories of playing with neighborhood friends until the sun set.

Meanwhile, the area hadn’t hit its stride just yet.

“In the 80s, D.C. was still the murder capital of the world,” Kim said. “There wasn’t a lot going on. It was kind of the wild, wild west in Old Town and in Alexandria, in general.”

As a student at T.C., Kim studied computer science and even worked at Electro Steam Generator Corp., the building he would go on to buy, for a time. Kim initially wanted to be an architect, but an advisor at T.C. convinced him to pursue computer science instead.
He headed to Virginia Tech with the intention of studying that, but didn’t engage with the classes or material. He made the switch to urban planning, which he said married his creative and analytical side.

After graduating from Virginia Tech, Kim moved back to his hometown during a time when the region was doing well economically.

“I started to see D.C. picking up. … A lot of the principles I was learning [while studying urban planning] dealt with things like revitalizing the waterfront. I could see stuff like that happening, so it was really exciting. I decided to stay here,” Kim said.

He learned about real estate by researching on the internet and turning to Greenway for mentoring and advice. Since helping him buy his house on Pendleton Street, Greenway has watched Kim grow.

“He was a young kid who had never purchased anything. He didn’t really understand the whole process of it. Back then … you met face-to-face when you did an application. We hit it off. He was really genuine and really eager to know everything on how mortgages
worked, what the process was,” Greenway said.

All these years later, Greenway said he isn’t surprised that Kim has successfully built a real estate portfolio of his own.

“There’s so many people I talk to that never get [it] or they get it, but they never act on it,” Greenway said. “That’s one of the things I like about Teddy – he’s so driven and he goes for it, which is what it takes.”

Many of Kim’s biggest real estate opportunities have come together as a result of long-running relationships and a lot of persistence.

Mason Social came about in that way, over frequent conversations with the owner of 728 N. Henry St. Kim had seen the building – which had long hosted frequent T.C. haunt Esmeralda – become vacant, and saw potential for a neighborhood spot. Once he got in contact with the building’s colorful proprietor, he would visit him at 700 S. Patrick St. frequently – sometimes twice a week – and talk to him about his life, never hesitating to ask about the building at the end of the conversation.

“I ended up hearing about his life over a two-year period and going to this gas
station on a regular basis of about twice a week,” Kim said. “We became friends. I would always ask him about the restaurant and he would always say ‘Come back when you have time.’”

While conversations with the owner remained ongoing, he reconnected with an old school friend, Chad Sparrow, who had also seen potential in the building. They decided to pursue it together, bringing on Sparrow’s brother, Justin, and Larry Walston. Once they opened in
2015, the accolades followed.

“The feedback from the community was great. We had people coming in saying that they moved into the Belle Pre because of Mason Social,” Kim said. “They had come from other markets like Clarendon and they were coming to a place where they appreciated something cozy, something where it’s your neighborhood spot.”

Kim exited that partnership when he decided to focus on quick service restaurant models, a category into which the recently opened People’s Drug fits. That project was also done with old friends, Seth McClelland and Ian McGrath.

“We remembered the joys of eating at the counter at [local pharmacy] The People’s Drug and places like G.C. Murphy’s at Bradlee,” Kim said. “As a kid, I remember biking there with the cards in your spokes at about 6 or 7 [p.m.] and it would be a group of five of us from the neighborhood, sitting at the counter and buying these fake candy cigarettes and a grilled cheese sandwich.”

Kim, McClelland and McGrath brought those memories and the Americana trend to The People’s Drug, which features American-inspired sandwiches and cocktails. Kim said the space, which is less than 1,000 square feet, perfectly houses the concept. Chop Shop Taco, which will open as part of Madison Collective on Henry Street, will fit into the same model as The People’s Drug.

It’s being opened in collaboration with Kim’s college friend, Kris Garcia, and chef Ed McIntosh. The restaurant’s name pays homage to one of the building’s former occupants, a “chop shop” for stolen cars.

That speaks to Kim’s strategy, which involves preserving and often enhancing a building’s historic features, while transforming it into something new.

“We’re not going to hide much of the original structure – we’re going to honor it,” Kim said.

about working with Kim.

“He’s a local and is very interested in the history all over Alexandria. That was really appealing to me, but, at the same time, he wants to move forward and bring a little bit of new life, without changing everything. It’s not like he wants to tear everything down, obviously,” Marlowe said. “This is a classic building – it’s keeping that element.”

Kim isn’t someone who holds on to a building just to hold on to it – he’s always thinking about profiting from the value he provides.

“I’m always thinking about the value position I’m sitting at. In some instances, the value is capital. I’m trying to get to that place, but I’m not there yet. My value is the sweat poured into the transformation,” Kim said.

“Typically, what I like to do, until I get to where capital is my value, is getting an asset that needs some type of re-working, whether it’s tenants, construction, rezoning. I put my value into it that way and then move on to the next project. Once I get the asset where it is something that I think is the peak for the time, I decide to move on and exit to the next project.”

Kim’s company, Avanti Holdings, is balancing multiple commercial projects, including the building the company is housed in at 1605 King St. 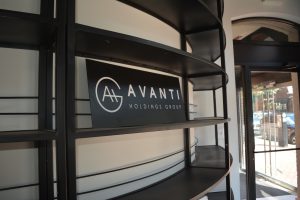 The company, founded by Kim, Keinan Ashkenazi and Greg Salvaggio, started with a $2 million warehouse on Calvert Avenue that the three decided to go in on together.

They decided to make their partnership official and incorporate the company, named after the main chairlift in Aspen and after the Italian word meaning “to move forward.” Ashkenazi called Kim the brains behind the real estate.

“He has the uncanny ability to kind of weed through a lot of the details and nonsense and other things on a real estate deal that’s presented to us and very quickly analyze whether it’s a good deal or not,” he said. “… He does it with people that have been in the industry 20 years longer than him and he’s a lot sharper than 99 percent of them.”

At the moment, the company’s investments are focused within the city limits. Ashkenazi said that’s by design.

“Most of what we try to do is really improve the fabric of the city in areas that maybe just are kind of stale and old. We try to bring some vibrancy and interesting tenants,” Ashkenazi said. “We won’t just let anyone be a tenant. We try to get better, more interesting, more vibrant [tenants]. Rather than just another nail salon, we try to get something that’s a little more interesting for the growth of Alexandria.”

Kim is motivated to focus on local investments both because he knows the city well and because he keeps seeing the potential that prompted him to return after college.

“Being born and raised here is really helpful. And living within five blocks of the majority of our projects is very helpful. Hearing and knowing what the community needs is helpful,” Kim said. “Right now, as we continue to grow, we still see a lot of opportunity here in Alexandria.”

Kim said the city is poised, more now than ever, to grow.

“The fact that Old Town, as a generalization, has been slow to adopt is because these industrial areas weren’t developed until now,” Kim said. “I understand not wanting to change much of King Street when you have a building from the 1700s, but, in those areas where you have a warehouse from 1960, that’s a great opportunity to do something.”